Which kind of fish should we eat ? 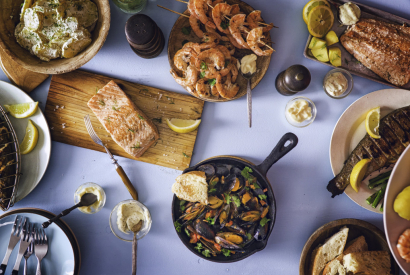 Current trends dictate that we should be serving up more fish on our dinner plates and consume less red meat. This development is explained by two factors. We now know that excessive consumption of meat increases the risk of developing bowel cancer. However, we also know that fish is not only rich in protein and, in general, low in fat, but above all the vast majority of fats it contains are considered to be good for us: apparently these omega-3 fatty acids are naturally equipped with anti-inflammatory properties. Fish contains two important types of omega-e fatty acids: EPA (eicosapentaenoic acid) and DHA (docosahexaenoic acid). One of the main causes of death today is atherosclerosis, which is caused by inflammation and thickening of the artery walls. Yet omega-3 fatty acids help to fight against inflammation, and in this way, reduce the risk of atherosclerosis, and also heart disease and stroke.

Fish is not the only source of omega-3. Crustaceans, molluscs, meat and some plants also contain omega-3, but in much lower concentrations than fish. Eating fish on a regular basis can reduce the risk of having a heart attack by 25% or more. Moreover, studies carried out in this field show that omega-3 contributes to healthy brain functioning. In this way it reduces the risk of suffering from cognitive impairment or dementia during old age. It would also seem that breastfed babies whose mothers regularly eat fatty fish, develop better visual functions than that those who do not. Finally, some studies suggest that omega-3 reduces the risk of rheumatoid arthritis, and even depression and asthma.

But which is the right fish to choose ?

The French Foods Standards Agency (Agence nationale de sécurité alimentaire) recommends eating fatty fish two or three times a week. Among the species that contain the highest levels of omega-3 are mackerel, atlantic salmon, tuna, herring and sardine. Food supplements made from fish oil are another source of omega-3.

Many fish species contain toxic chemical residues (heavy metals such as mercury for example), antibiotics or even pesticides. Fish ingest these products in polluted rivers or when coming into contact with wastewater. However, their organisms are not able to excrete these pollutants, and therefore toxic residues accumulate in their flesh. The larger the species, and consequently the higher up its place in the food chain, the greater the risk that its flesh will contain large concentrations of toxic chemical residues. It is therefore important to avoid eating swordfish, marlin or shark on a regular basis, as they are likely to contain mercury. Heavy metals are found in low concentrations in sea water, and accumulate in the flesh of fish that are at the top of the food chain. Even ingested in small quantities, mercury may slowdown brain development in children. Consequently, the French Foods Standards Agency recommends that pregnant women, women trying to conceive and young children should limit the amount of shark and swordfish they eat to once every fifteen days and not eat any other type of fish during this period.

Contrary to fish in the wild, farmed fish may be contaminated by antibiotics and other chemical products used by fish farmers to prevent or cure disease. This risk is particularly significant as for fish, legislation and tolerance levels vary enormously from one country to another. Indeed, during tests performed on imported farmed fish and sea food, it was not unusual for health authorities to come across fungicides, antibiotics and other banned chemical products.

So finally, which is the best fish ? It is better to choose herring, sardine and mackerel, all of which have high levels of omega-3 fatty acids. Moreover, these species contain very few toxins, and are fished using sustainable methods.