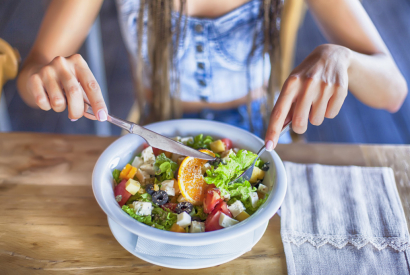 Elaborated in 1985 by Dr. Jean Seignalet, the Seignalet diet is not a diet in the strict sense of the term but rather a diet such as the Mediterranean diet or the Paleo diet. The basic premise of the diet is that modern foods are genetically different from ancestral foods, and the human gastrointestinal tract has not had time to adapt to these changes. Dr. Seignalet also believed that cooking at high temperatures can modify the protein structure of foods, which can lead to autoimmunity as well as alteration of the gastrointestinal flora.  He believed that these modified proteins may not be fully digested, which can change the bacterial flora from a fermentation flora (physiologically preferred) to a putrefication flora (not physiologically preferred). Bacteria, which work to putrefy proteins, create toxic by-products, which can cause many imbalances and lead to disease. The philosophy of the diet involves eating non-modified foods, which can be completely digested and assimilated, or used properly by the body.

Overviews of the seignalet diet

Wheat and its products (see exceptions below), oats, corn, barley, rye, kamut, millet, bulgur, couscous, (even though it is marketed as an ancestral grain) are not allowed. Buckwheat, quinoa, rice, wheat starch and corn starch are allowed. Soaking and sprouting of allowed grains is preferred.

All animal-source dairy are avoided.

Raw meat is preferred, such as in the form of carpaccio or steak tartare.  Gently cooked meat is allowed.  Raw deli meats such as parma ham, sausages and salami are allowed. Cooked deli meats (like cooked ham, turkey, chicken, roastbeef) are not allowed. True foie gras is allowed and its fat is considered healthy, although many people choose to avoid foie gras for ethical reasons.  Pate is typically not allowed, as it contains both milk and flour.

Just as with meat and eggs, the recommendation is, the less cooked the better. The author notes that lightly steamed fish is not as “dangerous” as cooked meat. Shellfish and oysters are allowed, preferably raw.

Best raw or poached, never hard-boiled. The reviewer notes that soft-boiled would be preferential to hard-boiled.

Dr. Seignalet recommended eating honey and pollen; chocolate must be pure and dark with no additives.  It may be sweetened with brown sugar, agave, honey or maple syrup; white sugar must be eliminated.

Any oil from a first cold press is allowed.

All are allowed in pure, additive-free form, including herbs and spices. Salt should only be taken in whole form, versus refined.

Tap water and mineral water are encouraged. Coffee and tea are tolerated in reasonable quantities. Chicory root consumption is recommended.  It contains inulin, which is a type of carbohydrate that serves as a prebiotic. Prebiotics are indigestible carbohydrates for humans, but friendly gastrointestinal flora are able to digest them and use them for energy.  All alcoholic beverages (excluding beer and drinks with added sugar) are allowed in moderate amounts. Drinks with added sugar, such as soda and commercial juices are prohibited.

Dr. Seignalet recommended avoidance of cooking as much as possible, with over 70% of diet consumed as raw. He recommended that cooking temperatures, when cooking is unavoidable, to remain below 212° Fahrenheit, with a preference for steaming.  Over this temperature (and especially over about 400°), he stated that many mutagens, Maillard molecules and isomers are created, which turn into toxins once inside the body. Light sautéing, stewing, steaming and dehydrating are allowed, since all of these methods don´t reach high temperatures. Frying and oven cooking are not recommended, since these methods allow very high temperatures to be reached. Eating smoked foods with moderation is recommended because of the carcinogen effect in the stomach.

No specific recommendations given.

Omega3 complex, Vitamin D, probiotics, magnesium and vitamin B6, bee pollen, phytotherapy food supplements can be taken to supplement the diet. They are indeed very useful in case of autoimmunity.

Dealing wit the seignalet Diet on a daily basis

This diet will require some shopping at a specialty or organic grocery store.  Genetically modified foods are not recommended, so organic foods would be the obvious choice.  Also, since quinoa, rice and buckwheat are the only recommended grains, one may wish to find flours made of these to use in cooking, as well as nut, bean and banana/plantain flours. All of these will require specialty shopping. There are no pre-packaged diet foods associated with this diet.  This diet can be expensive, although careful meal planning and the minimization of eating out (which is implied) can help to off-set costs.

What other autoimmune diets is this diet similar to ?

This diet is similar to most autoimmune diets in that organic and unprocessed foods are highly recommended. It is also similar to elimination diets for autoimmunity, since dairy, gluten, additives/preservatives are excluded. This is diet is unique to other autoimmune diets with its recommendation for mostly raw foods, including meats, fish and eggs. The reviewer notes, however, that the concept of consuming mostly raw or gently cooked meats/foods is not new or unique to this diet.

Caution, this diet is efficient in the long run. In the majority of cases, it will take 3 to 8 months, sometimes 12 to 18 months depending on the pathologies to be effective. Each person is unique and each evaluates the benefits of this diet differently.