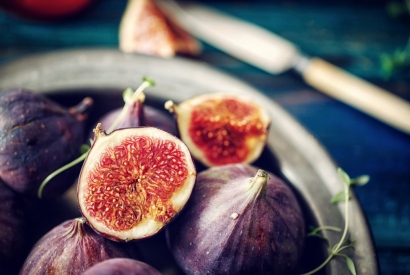 Native of Asia Minor, the fig is a fruit that since ancient times has been adopted by the Mediterranean peoples. Today, there are over 700 different varieties. Major producers and exporters of figs are Turkey, Italy, Greece. California known for its flourishing fruit orchards also produces and exports figs. In France, the fig trees grow almost everywhere. They are not bothered by frost and are found both in the Paris region that in Britain. However the French regions that produce figs are traditionally regions with orchards. Depending on the weather, the harvest takes place between June and September.

We can find two main varieties of figs on market stalls: The white fig with pale green skin has a red and very sweet pulp. It is very tasty but can't bear transportation. You will therefore find that variety very rarely, or probably close to the production sites. The purple fig with its many sub-varieties of which fig Solliès, the main variety of fresh figs sold in France. Her skin is dark red purplish and its pulp is a garnet red.

Eaten fresh, the fig is a sweet fruit that it would be a pity to pass. It provides about 57 kcal per 100 g, which corresponds to 2 or 3 figs according to their size. Extremely rich in minerals, the fig is known for its contributions in potassium (232 mg/100 g), calcium, magnesium, phosphorus or iron, manganese, copper. It also contains B vitamins(B1, B5, B6) as well as vitamin K and bioflavonoids. Finally, it is rich in fiber. Its consumption is also often recommended in cases of constipation to stimulate the intestines.

How to store and taste figs?

Fresh figs will not keep long, especially since they do not support the refrigerator. However, as it is consumed mainly in the summer, it is better to buy in small quantities and eat within 48 hours. Traditionally, figs are eaten raw with their skin, although some prefer to cut it in half to remove the pulp.
It is used to make desserts (pies, clafoutis, jams, cakes) and it turns out an ingredient of choice for salty sweet alliances. In fact, fig adapts particularly well with with poultry including duck (fresh or dried duck), raw ham, cheeses, salads, etc.
Like all dried fruits, dried figs are a fresh fig concentrate: they are sweeter and richer in nutrients for equal amount. One can eat them alone, mixed with nuts and other dried fruit in a homemade muesli, in salads, tajine, etc.